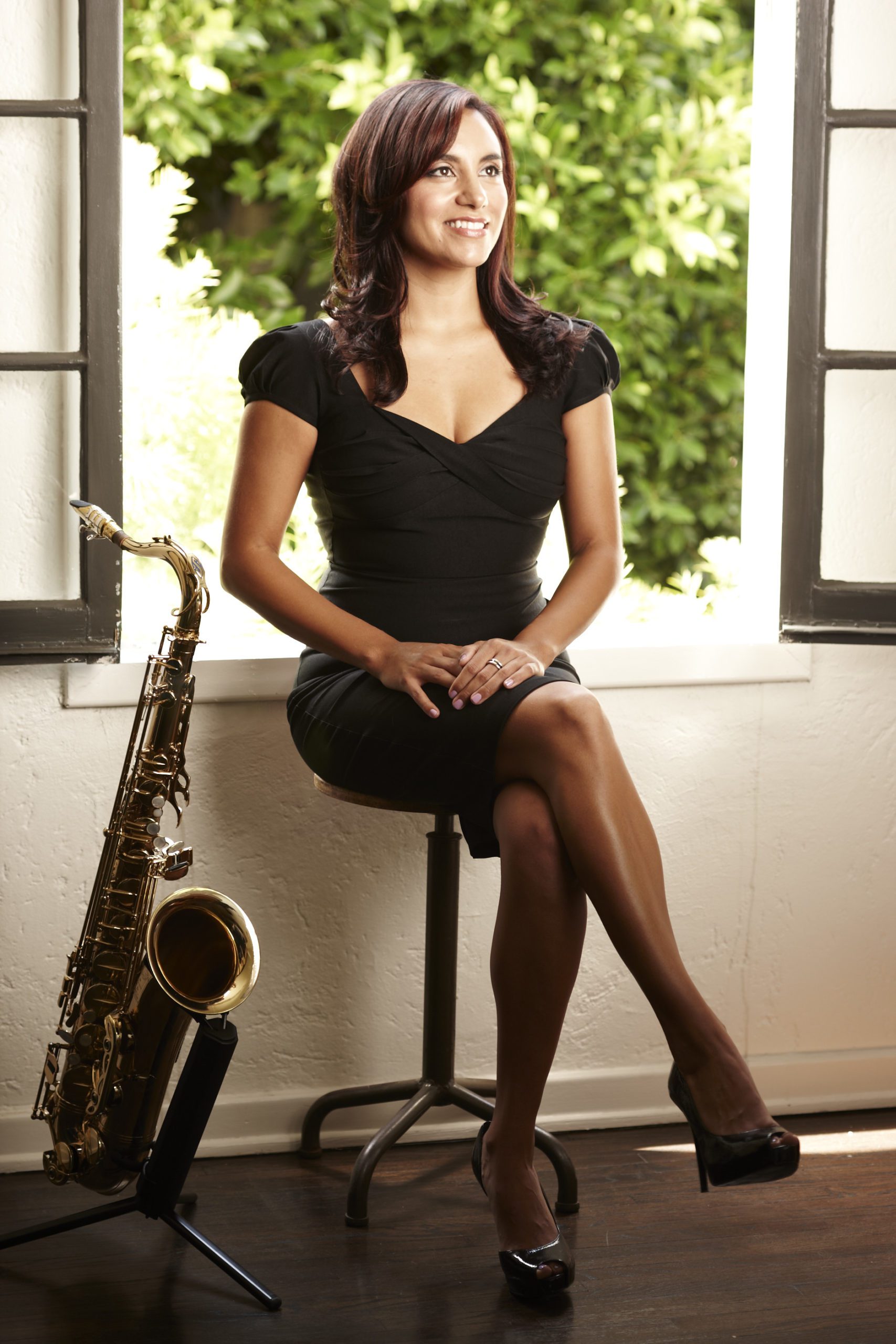 As parents, we want to support our children’s ambitions, doing what we can to give them the experiences and confidence that will lead them to the career of their dreams. If your child aspires to a career in music, it’s going to take more than being a good performer. Jessy J, professional saxophonist, is living proof that music lessons and music education matter in the journey that leads to a successful music career.

Jessy J was a special guest artist for the 2021 virtual Midwestern Music Camp, and she will be performing during the 2022 Heartstrings Gala, a benefit for Band of Angels.

Jessy earned a degree in jazz studies from the University of Southern California (USC). While she was studying at USC, she set her sights on becoming a studio musician, recording music for movies, commercials and television shows, but quickly learned she needed to spend time getting more experience. She spent two years touring with the off-Broadway, EMMY Award winning show Blast! While on that tour she started focusing on performing with her own band, so she began writing her own music. Jessy J returned to Los Angeles and put together her first group featuring Bryant Siono on bass and Norman Jackson on keyboards. In addition, she toured with Jessica Simpson, did studio work with Michael Bublé and the Temptations, and was invited to tour with Michael Bolton. Jessy’s diligence paid off when she met Grammy Award-winning smooth jazz producer Paul Brown at the Newport Jazz Festival and he agreed to work on her debut album, Tequila Moon in 2008. She followed that CD with True Love in 2009 and Hot Sauce in 2011. Jessy J was able to achieve her dream of becoming a studio musician in Los Angeles, working on the hit television shows “American Idol” and “The Voice.” Her work on “American Idol” impressed Steven Tyler, who invited Jessy to record on the latest Aerosmith album. 2014 saw the release of her acclaimed Second Chances, which joined her with guests Jeff Lorber, Norman Brown, Jimmy Haslip and Johnny Britt. With the release of My One And Only One, Jessy J continues to solidify her role as one of the most thrilling and innovative young voices to emerge in contemporary jazz in years. She is currently a musician for the hit show, “Dancing with the Stars.”

Let’s rewind a bit and look back at how music, lessons and education set up Jessy for her illustrious career

Jessy grew up with a piano in her family’s living room, and that was her first instrument. She recalls that playing piano trumped watching television, which had to be turned off when she was practicing. Jessy was a self-motivated young musician, so her parents didn’t have to fight that battle. The summer before her 4th grade year, she took up the saxophone and joined her elementary school jazz band. Jessy’s sister played clarinet, and her best friend played flute. Jessy learned to play both of those instruments as well and tried different saxophones. She was in three bands during high school, including marching, concert and jazz.

Jessy encourages young musicians to branch out and see what they like. “On “Dancing with the Stars,” musicians are required to play a lot of instruments. Versatility is key because we’re expected to pick up the music quickly,” she explains.

Jessy took private music lessons from USC professors from an early age up until her college years, so when it came time to apply, the professors knew her talent and dedication. Even now, she takes lessons, learning to use Pro Tool music software. Learning music is a life-long endeavor.

“To prepare for a music career, study classical music first. Everyone wants to start off with Lady Gaga or Ariana Grande, but it’s important to begin with the fundamentals. Learn long tones, scales, arpeggios and how to read all music. Grow into jazz, then pop. It’s impossible to skip these steps or there will be holes in your performance,” Jessy says. “Music theory isn’t taught in schools. Taking private music lessons, students can learn essential theory and the basics of arranging and composing.”

Most student musicians start off playing a beginning instrument, which is perfect for the early years. These instruments get students off on the right foot and are more affordable should they want to trade for something different. Come middle and high school, parents should plan on upgrading to an intermediate-level instrument and then a performance-level instrument.

Jessy remembers the time she got her Selmer Mark VI saxophone. “I loved the way it sounded. The tone. The sound. It only made me enjoy playing even more. Every instrument has a personality and sound. Rather than buy an instrument on the internet, go to the store so it can be played firsthand,” she explains.

Music education is such a crucial part of a child’s development. Every week, thousands of budding and advanced musicians take private music lessons at Meyer Music. Between our three locations, we have more instructors teaching music lessons than any other Kansas City music store.

There’s a reason why more parents trust Meyer Music for quality beginning band instruments, performance level upgrade instruments, and advanced level instrument rentals. Our Rent-to-Learn and Rent-to-Own programs make it easy for your student to upgrade as he or she grows and improves, plus easy and affordable for parents.

Our helpful staff can assist with choosing a private music teacher who is compatible with your child’s personality and skill level. Get to know our vetted professionals.