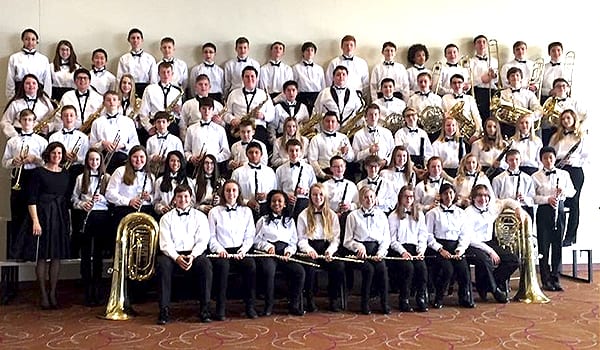 More than 6,000 teachers, students and parents were expected to attend the 2017 Kansas Music Educators Association (KMEA) convention in Wichita held February 23–25. Approximately 100 bands, orchestras and choirs from around the state submitted audition tapes in hopes of being selected as one of the groups to perform at the event. Of those 100 submissions, only 43 were chosen. Frontier Trail Middle School’s eighth-grade band, under the direction of Sara Smitko, was one of those 43, along with five others from the Olathe School District. 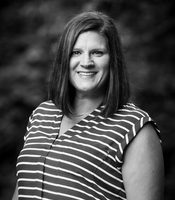 We spoke with Smitko about what it means to perform for the KMEA convention and how she prepared 67 band students for the honor. This is her thirteenth year as a band director and her seventh year at Frontier Trail.

Since applications are due at the end of May for the following year and groups are notified in August, band directors are auditioning their program’s consistent outstanding performances more so than a specific group’s performance quality. “Last year’s eighth-grade band students are now in high school, but I’ve had this year’s eighth-grade band students in sixth and seventh grade too,” explains Smitko. “Having worked with the students for a year or two, we can play to the group’s strengths. Preparing for our KMEA performance began with participating in Olathe’s parade at the beginning of the school year. After that, we began working toward a warmer, darker concert band sound, and students really started listening to each other play.”

When Preparing for a Special Performance, Confidence is Key

Being the only middle school band to perform at the KMEA convention might make a band director’s and students’ nerves a bit jittery. But that wasn’t the case for Smitko and her band students. “I understand the importance of helping students see what an honor this performance is versus breaking under pressure. It’s a delicate balance between the two. We spent all year building our students’ confidence. The more repetition with playing the music and with each other, the more confident they become,” says Smitko.

From August through February, the band had the opportunity to work with a Chicago-based clinician, as well as Kansas State University’s band director and Smitko’s fellow band directors, Danny Kaul and Jacob Wilson. “Students benefited from working with a diverse group of people who shared their skills and experience with them. Also, hearing others call out their strengths helped build students’ confidence,” says Smitko.

By the time the Frontier Trails eighth grade band performed for attendees of the KMEA convention, the students had spent many, many hours rehearsing. They honed their time management and organizational skills, and were well-prepared thanks to the support of the administration and parents.

Smitko had this to suggest for other band directors who want to prepare their school bands for special performances like the KMEA convention, “I’d recommend other band directors talk to colleagues who’ve already gone through the process of auditioning to perform at KMEA or other similar events. They’re a world of information,” states Smitko. “From students, require consistency, not perfection. Expect their best and don't accept anything less all the time, every year.”