Get Out the Tissues, Joel Goldberg Interviews Mike Meyers on “Round the Bases” 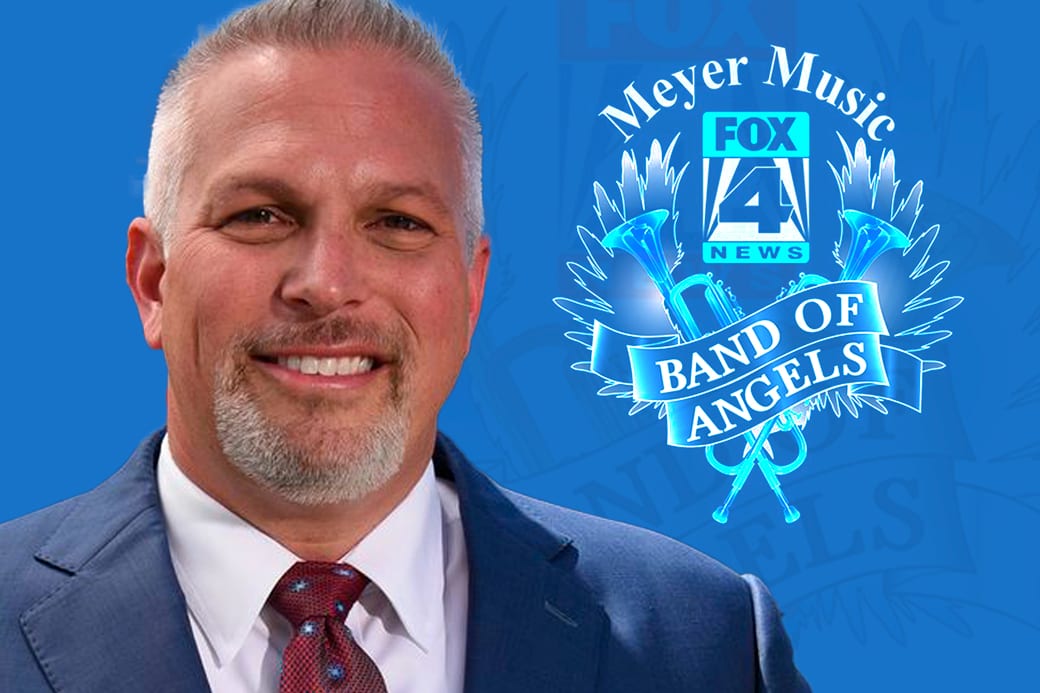 Joel Goldberg, host of “Round the Bases,” talked to Mike Meyer of Meyer Music about Band of Angels. Sure, Joel’s show is sports focused, but he and Mike have been friends for a few years. Joel is quick to point out that while he has no music background, he understands the connection between playing sports and playing an instrument. Both activities provide students a sense of purpose, joy, teamwork, structure, not to mention these qualities last into adulthood. Joel also is aware that the cost of sports and musical equipment can be a barrier for kids who want to participate.

During the course of the interview, Mike recalls how fortunate he was to grow up in what has become Kansas City’s first family of music, The Meyers. Ted Meyer a life-long Rotarian and co-founder of Meyer Music and his wife, Betty, Blue Springs community advocate and Meyer Music co-founder taught Mike and their other children that “if you can do something, you should.”

Now that Mike’s son has joined Meyer Music, the company is now with its third generation. Meyer Music had already been open for 45 years when the idea for Band of Angels was born. Mike explains, “It’s crazy when you come across something that should’ve already been in existence, but it wasn’t.” Meyer Music being established in the Kansas City community was a perfect home base for what was to become Band of Angels.

The Fox 4 television station had been airing stories about schools cutting arts from their programs in 2010. The station’s community relations manager and Mike connected. Students needed instruments but parents couldn’t afford them and there were instruments previously played by students who’d grown up and wasn’t using them anymore. Fox 4 and Meyer Music partnered to create Band of Angels, a 501c3 charity that collects music instruments and gives them to children in need for free so they can join band and orchestra programs.

The station had a 150-mile broadcast radius, but it couldn’t have viewers showing up at the door to donate their instruments. Where would they put them? Meyer Music has convenient locations across the KC Metro, making them logical collection spots.

In the first year, Band of Angels founders hoped to collect 50 donated instruments. They underestimated donors’ desire to pass on the joy of musicianship to others. Three hundred instruments were donated at Meyer Music locations that year. Now, the total number collected exceeds 2,200.

Knowing Mike as he does, Joel has seen the passion with which Mike talks about his family and his role (now board chairman) with Band of Angels. Mike had a box of tissues ready, knowing the emotional element of donating and receiving a Band of Angels instrument.

We won’t go into the details here (in case you don’t have tissues handy), but you can watch the “Rounding the Bases Live Episode 98 with Mike Meyer” episode on YouTube.

To learn more about Band of Angels’, how to donate an instrument, upcoming events or recent news, please visit https://bandofangels.org/. Any of the three Meyer Music locations can accept donations.