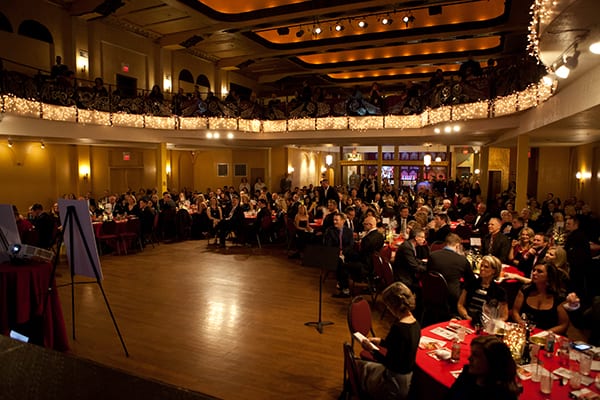 Four hundred guests sold out the annual Band of Angels' Heart Strings Gala on February 4, 2017 at the Madrid Theatre. They gathered to raise funds that are used to help purchase musical instruments for children in need who want to study music , refurbish donated instruments and send young musicians to summer music camp on full scholarships – 107 students so far and counting. 2017 surpassed 2016 as the most successful Gala yet, raising $70,000 to support Band of Angel’s mission. 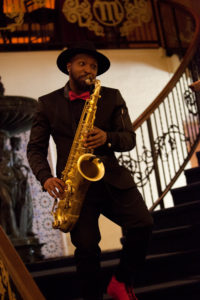 Ryan Kilgore, a saxophonist for Stevie Wonder, was the Gala's celebrity musician.

This year, Ryan Kilgore, Atlanta native saxophonist for the legendary Stevie Wonder, was the Gala’s celebrity musician. He couldn’t have asked for a better opening act than Mariah Covington, who wowed the crowd, giving them a taste of what the night had in store. Mariah attended summer music camp on a Band of Angels scholarship and played her performance-level viola presented to her at last year’s Gala.

Ryan took it from there, entering from the balcony and working his saxophone magic through the crowd. According to an article published on The Atlanta Journal-Constitution, Ryan starting playing the horn when he was 10 years old and made a promise to his grandfather, who gave him his first instrument, that he’d never stop playing. Not only has he kept that promise, but he’s gone on to play for international audiences, touring with Stevie Wonder. Beginning in 2007, Ryan has studied at what he calls the School of Wonder, Stevie Wonder that is.

While in Kansas City for the Heart Strings Gala, Ryan brought that “schooling” to district bands around the KC Metro area, from north at Platte County to south at Blue Valley. Two hundred students at six schools had the opportunity to meet Ryan and hear his inspiring message that every person has a passion, every passion has a purpose and every purpose has a person. Ryan’s own Band of Angels-type foundation, The Kilgore Music Foundation, is getting off the ground in his hometown of Atlanta to bring awareness to the community about the value of music and music literacy in children’s lives, improve access to music education programming and expose aspiring musicians to the music industry’s professional side.

“At my high school in the 90s, there were 300 kids in the marching band, me included. Today, there is half that number. Why? Is it lack of enthusiasm in recruiting? Students not able to afford instruments? It’s time to get strategic about finding answers and solutions. When out on the road, professional musicians need to visit classrooms. We need to share our stories, encourage females to join a male-dominate industry, show students more examples of music careers beyond band directors and inspire them to engage with their communities through music. Music isn’t just an ‘extracurricular’ activity. Imagine a bride walking down the aisle to silence. I learned a lot from my weekend in Kansas City with Band of Angels. I’m shifting my career direction from going platinum to being an example to students. I’m a product of a public school music program, and I’ve traveled the world playing music. There are so many directions music can take you, from international stages to brightening patients’ days at children’s hospitals,” explains Ryan.

Ryan was thrilled to share the stage with the star of the Heart Strings Gala, Destiny White-Dixon. She was presented with a brand-new Bach Stradivarius silver trumpet courtesy of Conn-Selmer, Inc. Destiny is a passionate musician and received her first trumpet from Band of Angels.

Barely a dry eye watched as Destiny’s story unfolded on the video screen. Destiny can be expressive through her trumpet, and she’s a very expressive person. She attended a week-long summer music camp on a scholarship. Destiny’s camp band director asked students to play a color. Surprised, but intrigued, Destiny chose purple, and she’s been playing purple since. Her passion and talent were on full display when she couldn’t help but join and hold her own with Ryan on stage during his encore performance of Bruno Mars’ “Uptown Funk.” 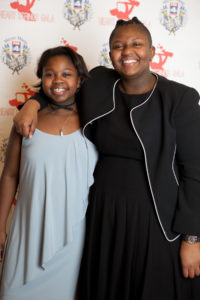 Destiny’s mother, Selita White, believes Band of Angels is a blessing for their family. Destiny’s younger sister is following in big sister’s footsteps, and received a flute and is taking lessons.

“Destiny is the perfect of example of why Band of Angels was founded. Many students have the desire to play music, but also they have a need for instruments and opportunities to be surrounded by music throughout their school years. There are many young women and men out there in our local school districts, just like Destiny, who given the chance, can express themselves, learn a life skill and create a path to college that maybe wasn’t there before,” explains Mike Meyer, Band of Angels chairman.

Many stories like Destiny’s are yet to be written. Between people donating unused instruments that are collecting dust, attending fundraisers like the Heart Strings Gala and Art that Blows and just opening their wallets, Band of Angels can help students write their stories.

Band of Angels was formed as a partnership between Meyer Music and Fox 4 TV in KC to collect used music instruments and provide them to kids in financial need. Band of Angels also offers scholarships to summer music camps to these students who have received instruments through the program.

For more information regarding Band of Angels, visit www.bandofangelskc.com or email angels@meyermusic.com.