The Patrick John Hughes Parent/Booster Award annually recognizes the extraordinary commitment, dedication, support and sacrifice of music parents and boosters around the world by shining a spotlight on an individual who exemplifies these qualities.

The award is named in honor of Patrick John Hughes, the father of Patrick Henry Hughes. Patrick Henry is a remarkable young man who, despite physical challenges that would seem overwhelming to many, has excelled as a musician and student, singing and playing piano and trumpet with the Louisville Marching and Pep Bands, with the help of his father, who tirelessly maneuvers his son’s wheelchair through the formations with the other 220+ members of the Cardinal Marching Band

Mr. Meyer’s affiliation with the Blue Springs, Missouri band program began as a student member in the 1980s. In 2000 he returned as a booster, beginning his extraordinary run as a fixture in the band and community.

“Tom Meyer wakes up in the morning pondering what he can do to help the band program,”said Dr. Tim J. Allhouse, the Blue Springs High School Director of Bands.

This devotion has included an incredible level of creativity and above and beyond gestures. He’s donated parking cones to increase the safety of the marching band’s parking lot rehearsal space. He’s provided transportation to the winter guard and assisted with all ensembles--not just those in which his daughters have been involved. And he even got up on a Saturday morning to pitch a tent on the roof of the school so the directors could have shade when observing the band at rehearsal. 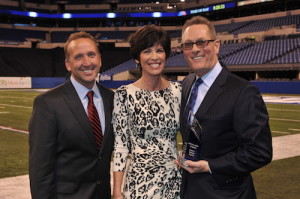 His fundraising ideas, efforts, and execution have helped the program fundraise an incredible $50,000 in just one year. From raffles to trivia nights to transforming the marching band festival’s program from a four-page handout to an impressive 44 page professional publication with national sponsors, his ideas have made a direct, visible impact. One of those ideas, a “Drive for UR School”event with a local Ford Dealership, raised $6,000 in one day.

“Mr. Meyer has the ability to unify a group of people and to put teams together quickly to accomplish incredible projects,” said Dr. Allhouse. That ability has won him admiration with his fellow parents and boosters, who praise his enthusiasm and interest in nurturing music programs not just at the high school but the elementary and middle school levels, as well.

“He believes that this support encourages student participation in the arts and helps to make them more active and good at their craft by the time they are in high school,”said Lee Ann Rothmier, who coordinates the school’s annual marching band festival and has worked with Mr. Meyer as he chaired the festival’s fundraising committee.

Even more impressive than the countless hours he spends working with the band program is that he does it while juggling the family business, Meyer Music, a three-store chain his parents opened in Blue Springs in the 1960s that he now owns with his two siblings. He has utilized the music store as a way to further aid music students and families through Band of Angels, a program that refurbishes donated instruments and matches them with students in need who otherwise could not participate in band. In the program’s first year over 300 instruments were collected and matched, and applications continue to pour in from parents and band directors.

But it doesn’t stop there.“Not only has he helped to supply every brass member with a professional quality horn to use in the past 5 years, but he also helps the program by fixing them,”said fellow parent Matt McMahill.“He sacrifices time away from his business every week to selflessly help to keep the band going in the right direction. Plus, in spite of the many, many time consuming things he does for the band program he still keeps the right attitude.”

That attitude and drive is perhaps what individuals admire the most.“It is the extra effort provided by individuals such as Tom Meyer who separates our program from others,”said Mr. Dave Adams, principal of the Blue Springs High School.“He is willing to do whatever job, no matter how big or small. He is vital as a main organizer of our Band of America Marching Band Festival that is one of the largest and most successful in this region. All this extra work and effort is done with such a positive attitude and goodness because he loves what our music program provides for our students. He believes fervently that the benefits of being involved are the best for our kids and he wants to provide an outstanding opportunity for everyone involved.”

“Tom Meyer is the real deal,”said Dr. Allhouse.“ He is one in a million, has a heart of gold and truly exemplifies the servant heart. The Blue Springs Golden Regiment is a better organization because of his influence and we will be forever grateful for all he has selflessly given to the band. Generations to come will benefit from Mr. Meyer’s kindness.”